Lives of Jim is a strategy game, for two to four people, in which players take on the role of a "version" of the hapless Jim. Each version of Jim is from an alternate, future reality. Players compete to become rulers of all Jim-realities, thereby ensuring their survival. To do this players will generate time particles, collect node connector and reality rotation cards, and move their player tokens deeper into the Jim-time-pool to become the one, true Jim.

Shuffle the character cards together and deal out 1 to each player, or 2 each in a two player game. Remove the leftover character cards, face down, from the game, and keep them secret until the end. No peeking.

Shuffle the connector and rotation cards together and deal out 3 to each player. Deal out 5 each in a two player game.

Take the rest of the shuffled connector and rotation cards and place them on the leftmost space of the asset board. Deal out three cards face up from the draw pile in the three spaces next to it to form a stock.

Object of the game

Be the first player to control your home reality: have your player tokens in the three circles of the two innermost rings on the big board that match your character card.

In a two player game be the first player to control your two home realities: have your player tokens in the six circles of the two innermost rings on the big board that match your two character cards.

To connect you will need any two connector cards from the same suit (two hearts, two clubs, or two face cards for the star suit — ranks don’t matter) and one time particle. Discard the two cards, pay the time particle back to the stock of remaining particles, and place your player token in any one of the three circles matching the suit of connector cards you discarded. If you discarded two hearts you would place your player token on one of the three outermost heart spaces.

If you have one of the five rotation cards (the four aces and one joker) you can discard it and use one time particle to rotate any one of the three rings one space to the right or left, moving all tokens in that ring one space over in the direction of your choice. You can rotate the outer ring, the middle ring, and the inner ring. This may move player tokens into or out of the different sections. This may be the reason why you'd want to use a rotation card!

Here's a quick chart with the cost for movement by ring:

After buying a card take a new card from the draw pile and put it into the stock in place of the purchased card.

Take one of your player tokens not on the board and place it into the circle with a plus sign on the asset board. This is the time particle generator. Player tokens placed here will generate time particles that you can later collect. 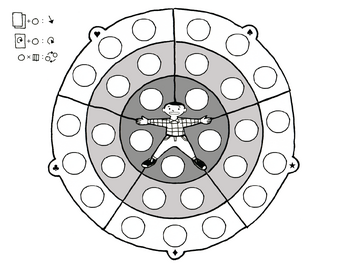 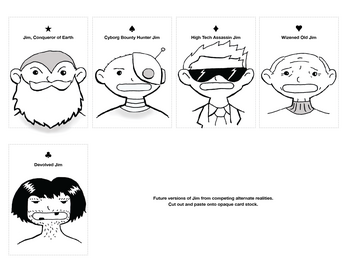 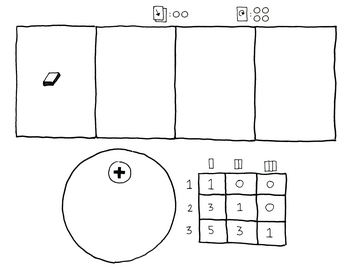